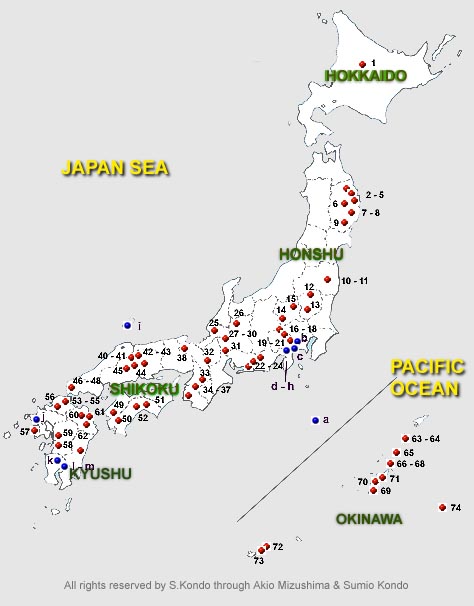 This map of tourist caves was provided by the now gone Whole Earth Club (WEC). The creator of the map was Sumio Kondo and it was embedded into a page which listed the cave names to the numbers. When they dissolved in 2001 the pages were hosted by the Japan Speleo Page (JSP). The WEC and JSP were merged into the Speleological Society of Japan (SSJ).

As far as we know they do not have this map online anymore, but you can check out the waybackmachine links below. They now have a textual list without numbers on the SSJ website, which is from 1997 and quite outdated. We have listed any cave on this list except Gouya daiichi syounyudo, Tagawa-city, Fukuoka, which was probably closed. See the full list in Japanese, translated, and the respective page on showcaves.com in the table below.

観光洞として照明がある か、照明を貸し出すなど、 特別に装備を必要としない ものをリストアップした。 営利目的ではなく、社会 教育上照明のある洞窟も含 まれている。
We have listed items that do not require special equipment, such as whether there is lighting as a tourist cave or rental of lighting. It also includes caves with lighting for social education, not for commercial purposes