Proteus anguinus is a true troglobiont. It is an amphibic salamander, living only in the Dinaric Karst, the karst areas along the Mediterranean Sea from Trieste in Italy to Herzegovina. It can only be found in this region, it is a so-called endemic species. Additional occurrences, in the Harz in Germany, in Moulis in France or in Grotte Oliero in Italy go back on human intervention. During several hundred years of research numerous specimen were relocated for scientific purposes.

The Proteus in the Dinaric karst is a remainder of a Tertiary familiy of amphibians. It is today nearly extinct with only six remaining genuses world wide. Proteus was known by Charles Darwin, who writes about cave animals in chapter 5 of his book The Origin of Species:

Effects of Use and Disuse. He calls them "wrecks of ancient life".

Proteus looks like a salamander, but because of the pink skin and the small arms and legs, it looks also a little bit like a small human. This is the reason, why it is also called Human Fish. Other names of Proteus anguinus are Olm and White Salamander.

The Olm has no eyes and no pigments in the skin, if grown in the darkness of a cave. A very interesting fact is, that olms grown up in daylight, get eyes and a brown skin. This are the remains of the evolution before the caves! But the eyes are not complete, some important parts of the optic nerve are missing, and so this olms have eyes but are still blind.

The olm breathes with gills behind its head, at the left and right side of the body. The gills are outside the body and are transparent. They look reddish because of the blood flowing through. But it is an amphibic animal and has also lungs to breath on land.

Olms are said to become older than 100 years. This is not proven until now, as it is very difficult to examine them in their natural environment. They are able to go without food for up to six years! One reason is the low temperature of the cave water, where the whole metabolism is low.

Since the 19th century scientific institutions in Europe examined Proteus anguinus. Specimens were relocated to other caves to test which influences the slightly different environment has. Most of the relocations were successful, and where both genders were released, the population stabilized. During the 20th century, the Slovenian government gave living specimens of olms to several institutions in the world. But they exported only male animals, to prevent reproduction. 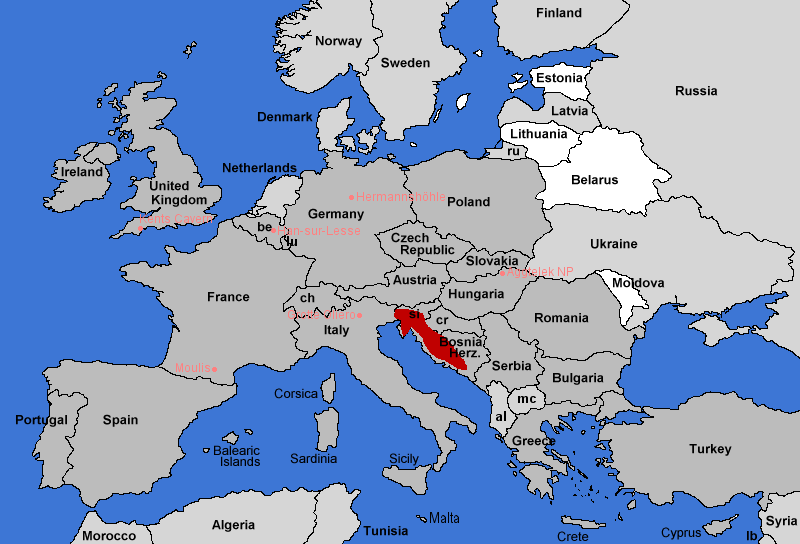 The natural habitat of the Proteus anguinus is marked in dark red.
The bright red dots show locations where specimen were relocated to for scientific purposes.